"MY LIFE HAS BEEN FOREVER CHANGED BY P.E.O. AND THE SPECIAL ‘JEWELS FROM THE GEM STATE’ THAT HAVE TAUGHT ME THE TRUE MEANING OF SISTERHOOD"

(Click here for the Report to Idaho Chapters.  Each Chapter must report on the International Convention) 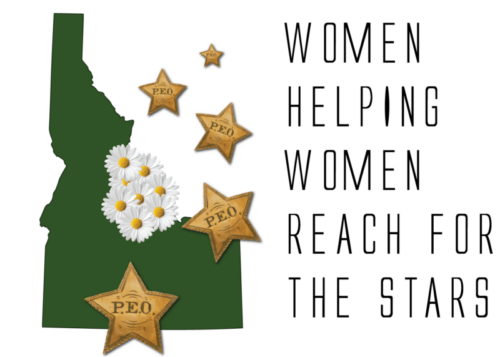 I grew up in Weiser, Idaho as did my mother (Chapter T, Weiser) and grandmother. I grew up west of Weiser on a farm. I was so privileged to live in the country and enjoy the solitude and peace that comes from no traffic or streetlights. I have 3 siblings, Penny Thorpe (Chapter T, Weiser), Scott Syme (Patti, Chapter F, Caldwell), Stuart Syme (Shawna, Chapter T, Weiser).

I met my husband and married him 8 months later at the ripe old age of 18. We have been married for 43 years as of February 2020. We have two children, daughter, Elizabeth (Chapter IH, NE), and son, Rob. Elizabeth went to school at the University of Nebraska Lincoln because she was a big football fan. It was a good fit. She met a wonderful Nebraska guy (Darin) and they live in Omaha, NE with their 4 children. Their twin boys will graduate high school in 2021. My son, Rob, lives in Fruitland, ID with his wife Brianne and their two children. He works for the Veterans Administration and Brianne is an RN. She teaches in the nursing program at TVCC in Ontario, OR. Rob graduated from Boise State but is a big University of Idaho fan. My grandchildren are the smartest, best looking, nicest children on the planet, I might be prejudice.

I went back to school when I was 28 and graduated from Eastern Oregon University with an Education Degree. I taught 4th grade for 6 years, gifted and talented for 2 years and finally worked at the district office as a volunteer coordinator for 2 years. All my years in education were at the Weiser School District. I, then, substitute taught for 4 or 5 years. I left the education world and became a secretary for a small irrigation district in Oregon. I now am a farm hand for my husband, which I enjoy immensely.
While I tried many things in my life, my husband has had the same two jobs our entire married life. He is a farmer and an onion broker. He farms in the summer then sells onions all winter. He loves the independence of being outside farming and enjoys his customers who buy our onions.

Herb and I love to travel. I will say a lot of it is to Nebraska to see our grandchildren. We also enjoy road biking but, lately, we just have not had time. Hopefully, as Herb will be retiring from farming in 2020, we might have more time for biking and travel. We spend a lot of time studying the Bible and are looking forward to traveling to Israel. We are members of the Weiser Community Church and are involved in Celebrate Recovery. We were youth group leaders for 12 years. Mission trips have been a big part of our lives and our favorite is building houses in Tijuana, Mexico with Homes of Hope.

My P.E.O. life started in 1985. My mother and I were initiated in November of that year into Chapter T, Weiser and have loved it ever since. I was not as involved when my children were small but when they were older, I hardly missed a meeting. I have been on the Chapter House Board and requested a charter for Chapter CO in Fruitland. Being involved in starting a chapter is a wonderful learning experience. I love every aspect of P.E.O. but I have to say, the best part is the love between sisters!